The Madonna of the Trail in Pennsylvania, Beallsville.

Located between the borough of Beallsville and the small community of Richeyville is the Pennsylvania edition of the Madonna of the Trail, one of 12 such monuments along U.S. 40 and U.S. 66 in each state through which those routes pass.

These monuments were planned by the Daughters of the American Revolution in the early 1900s, and were meant to mark the National Old Trails Road, which included the National Road on its journey west, as well as commemorate female pioneers who settled the American west. Each statue is identical and was designed by August Leimbach.

The Pennsylvania Madonna was put in place on Dec. 8, 1928 – the tenth of 12. Every monument is along the original National Road or Santa Fe Trail, with the exception of Maryland’s, which is in Bethesda, a suburb of Washington, D.C. In order from east to west, Madonna of the Trail monuments are located in Bethesda, Md.; Beallsville, Pa.; Wheeling, W.Va.; Springfield, Ohio; Richmond, Ind.; Vandalia, Ill.; Lexington, Mo.; Council Grove, Kan.; Lamar, Colo.; Albuquerque, N.M.; Springerville, Ariz.; and Upland, Calif.

Pennsylvania’s monument was rededicated in 1978, and was restored and rededicated again in 1990. The DAR’s Washington County chapter is responsible for the maintenance of the statue.

The Madonna of the Trail is located right between the central areas of Beallsville and Richeyville, directly across U.S. 40 from the main entrance of the Nemacolin Country Club. Like all of the Madonna monuments, it is free and open to the public. A small pull-out exists on the north side of the National Road (the same side as the monument). It’s important to use common sense when visiting the monument, as it is right up against U.S. 40, and drivers aren’t always aware of pedestrians along the highway.

Also, check out these other posts on Madonnas around the country from Jim Grey, Sculpted Portrait and Frank Brusca. 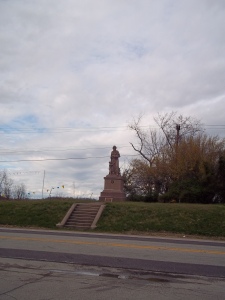 The Madonna as seen from across the National Road at the entrance to the Nemacolin Country Club.

This entry was posted on Saturday, April 21st, 2012 at 20:41 and tagged with beallsville, madonna of the trail, national road, pennsylvania and posted in Beallsville, History/Museums, Pennsylvania, Washington County. You can follow any responses to this entry through the RSS 2.0 feed.
« Mile 75 – Frank L. Melega Art Museum, Brownsville, Pa.
Summer 2012 Festivals Along the National Road »

One response to “Mile 83 – Madonna of the Trail, Beallsville, Pa.”